The story continues at B2BTechMark.com

Since becoming a freelance tech marketing consultant a couple of years ago, I've had "Build a website" on my to-do list. Too busy writing content, it didn't happen until recently (with limited time available, I was curious if it was possible to build a rudimentary website in 1 day. It is).

Now I'm retiring my ITSMsavvy (this one) and B2BTechMark blogs in favour of articles on my new website:

Articles on enterprise IT and B2B technology marketing will continue there.

"Internet of Things" is a bourgeoning buzzword, but it's not really a new idea. Connecting home appliances and other non-technical "stuff" to a network to provide some level of remote monitoring and control has been around since people started worrying about whether they'd left the oven on at home.

But there is a broader picture here. "Things" are just one part of the mix that make up a value network - the network of things, data/information, people and processes which must all interact for some outcome to be achieved.

As per usual, IT focuses on the physical and takes the Internet of Things as the priority. Why? Because IT operates primarily in the world of the tangible. IT people like boxes and wires. They love to build stuff.

The truth behind it is that you can't have any one of these four without the others (without failing to gain any benefits):

In order to achieve any business outcome, a network of all four must come into play. So, having a physical focus around "Internet of Things" will again prevent IT from grasping the full picture (the overarching business objective) and will keep IT people in a silo.


Just like the term Bring Your Own Device (BYOD) needs to give way to Bring Your Own Technology (BYOT) to illustrate that the scope is broader than the physical device (e.g. data/apps are also being brought into the workplace) - the Internet of Things needs to be considered in the broader context of the Internet of Everything. Value networks disregard what type of nodes (devices, data points/sets, persons or processes) create the value. Any value network/system that doesn't take all four factors into account is likely to be ineffective.

The Socialisation of IT


Yesterday I stumbled across another fascinating opportunity for cross-pollination of ideas and an example of why IT suffers from operating as a silo.
Thumbing through a college book on Sociology and Social Policy for the Early Years, a few pages on the subject of Socialisation caught my eye – because of what it said about human development inside and outside of society. There are some interesting (yet disturbing) examples of what happens when children are raised in isolation and confinement, and the impact this has on their lives. What is also interesting is the parallels that can be drawn between the development (and ultimately maturity) of people and IT departments.

If a person develops in isolation, they aren’t able to observe normal behaviour and learn to operate within normal society. They don’t learn behaviours such as walking upright. They don’t learn language, so they can’t communicate. The same applies to groups of people. Isolation creates a cultural void between society and the isolated individual/group. 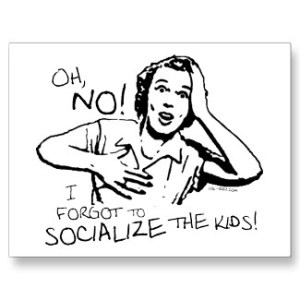 Insular IT departments socialise with grey boxes, so they fixate over the behaviours and needs of those grey boxes – causing them to be ‘withdrawn’ from the business:
Business behaviours that IT should observe and learn include:


In order to be effective in the context of the business, the IT department needs to get involved within the society of the business. It might sound a little patronising, but IT should show curiousity in the world in which it lives, just as a child does. When children develop into adults, they become able to influence the world around them: to become a driving force in society.